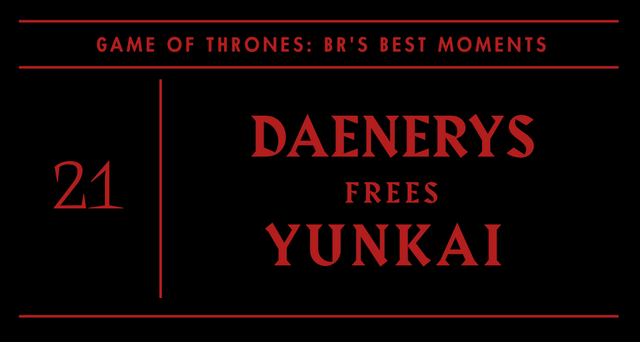 Bluth has delivered a perfect, beautiful take on this scene and its placement in the show, so I'll leave the stage for this one to him and, instead, want to refer to a snapshot of this passage in the books, which adds a meaningfully affecting layer to this moment and its importance to an aspect of Daenerys' inner life that the show has sadly never bothered to truly transfer into the show despite it being an essential pain of hers:

Dany looked at Missandei. “What are they shouting?”

“It is Ghiscari, the old pure tongue. It means ‘Mother.’”

Dany felt a lightness in her chest. I will never bear a living child, she remembered. Her hand trembled as she raised it. Perhaps she smiled. She must have, because the man grinned and shouted again, and others took up the cry. “Mhysa!” they called. “Mhysa! MHYSA!” They were all smiling at her, reaching for her, kneeling before her. “Maela,” some called her, while others cried “Aelalla” or “Qathei” or “Tato,” but whatever the tongue it all meant the same thing. Mother. They are calling me Mother.”

Game of Trivia: Welp, it's sad this didn't end up higher, especially as atonement for this last seaon but to come to the point, this was floating around in the Top 20 for quite a while thanks to bluth (SORRY fellow Katy Perry stan) but got bumped down later on because only the first submissions voted for it but at least they were all committed enough to Daenerys to write something up:​

Ryan: Yes, it's definitely a white saviour-y moment, but WHO THE FUCK CARES WHEN IT'S SO MOVING AND BEAUTIFUL. Again, another moment as to why The Mad Queen turn makes no sense. Dany is a queen of the PEOPLE and understands what freedom represents.
Ridley: I can guarantee that this scene is especially loved as much by me because of the music that accompanies it. Was also really nice to have something empowering happen right after the Red Wedding.
Dalty: Mhysa! White savior or not, I don't give a shit, great moment visually and beautiful moment for Daenerys as she saved those who were once like her. But now this is also used a moment to show how she was secretly Hitler so whatever. I'll always remember her this way.

Bluth: It’s weird because i never thought that much about this scene until after the show ended. on youtube i watched the loot train attack dozens of times, daenerys getting the unsullied many more, but after game of thrones finished i watched this scene again and something clicked that it’s the way i want to remember the show

the immersive nature of game of thrones has never been so much about the world-building than it is more so how palpable every action, reaction and consequence is. as a result, the viewers adopt a similar role to those who exist within westeros: we mourn over tragic deaths and fear for the lives of many we care about. it is also why the audience gravitates towards glimmers of hope much in the same way the people of westeros do - we all want to see a better world for those we care about.

daenerys is game of thrones’ version of gatsby’s green light, that little flicker from across the water that makes so many believe in something better than the horrifying, tragic world that exists today, even if we have to ignore the warning signs to do so. mhysa is so much more resonant as scene considering its place in the series. at the end of season three, the war of the five kings is over, house stark all but obliterated in a savage coup. yet, in some distant land across the narrow stretch of waves, there’s a dream of a new, better world. after the destruction of a family comes a new mother, hope in the face of tragedy. it’s that hope that makes people continue despite the atrocities around them, to believe that something is better on the horizon, and what compels viewers to keep watching five more seasons to see it all unravel again. but, just like the broken king said, “i only live in the past, now.”

Allstar said:
there were black people but they died for white savior moments or walking plot points for white people. the other ethnic people were sacrificed for the white ones too 💀
Click to expand...

this gif automatically reminded me of one of them Boykuakki videos

wow can't believe that racist scene made the list... pretty telling that it was only YT's that voted for it!

is that clip in russian


OMFG all those black and brown slaves. you just KNOW they have BBCs

No one wants to wake up to the news I woke up to this morning. No one. I was preparing my coffee, turning on wi-fi and the first thing I read is: “Daenerys is given the mad queen treatment”. I blinked my eyes countless times and I went on Facebook just to see more and more posts about it. I couldn’t believe it. My Mhysa dream was over and there I was at 8AM sitting in my kitchen looking at the screen of my iPhone.
Comment

Penk said:
wow can't believe that racist scene made the list... pretty telling that it was only YT's that voted for it!

That bluth commentary is easily one of my favorites of the rate! I really love his take on it and the commitment that went into writing this.

Unfortunately, it is also the first #1 to leave this rate, but kudos to bluth for sticking up for something inspiring.

bluth said:
not when u just attempted blackface using blueberries miss penk karma’s not a liar she keeps receipts

bluth said:
not when u just attempted blackface using blueberries miss penk karma’s not a liar she keeps receipts

that mhysa scene reminds me of this There were supposed to be white extras in that scene but they just hired the locals to where they were shooting and it would have been strange to ship whites from around the world for a quick extra part. At least I think that was what GRRM said when he was addressing the white savior aspect.
Comment

I think Season 3 is my favorite soundtrack. So many tracks that instantly click me to scenes even though I haven’t seen those episodes in years.
Comment

So this truly concludes it for today!

Let's see when we continue, maybe tomorrow, maybe the day after, etc. Once again, we will see how many people who've submitted will be online and able to participate and go from there!

THANKS A LOT for the participation by everyone today, I'm glad everyone is so actively joining in and discussing the moments after being posted (even Lance <3)!!
The last few batches took a little longer because I was hoping bluth would be here for his #1!!

Dany felt a lightness in her chest. I will never bear a living child, she remembered.
“Mhysa!” they called. “Mhysa! MHYSA!” They were all smiling at her, reaching for her, kneeling before her. “Maela,” some called her, while others cried “Aelalla” or “Qathei” or “Tato,” but whatever the tongue it all meant the same thing. Mother. They are calling me Mother.”

I know Bruno's write up for Lady Stoneheart's debut scene is taking a long time. Take all the time you need King. 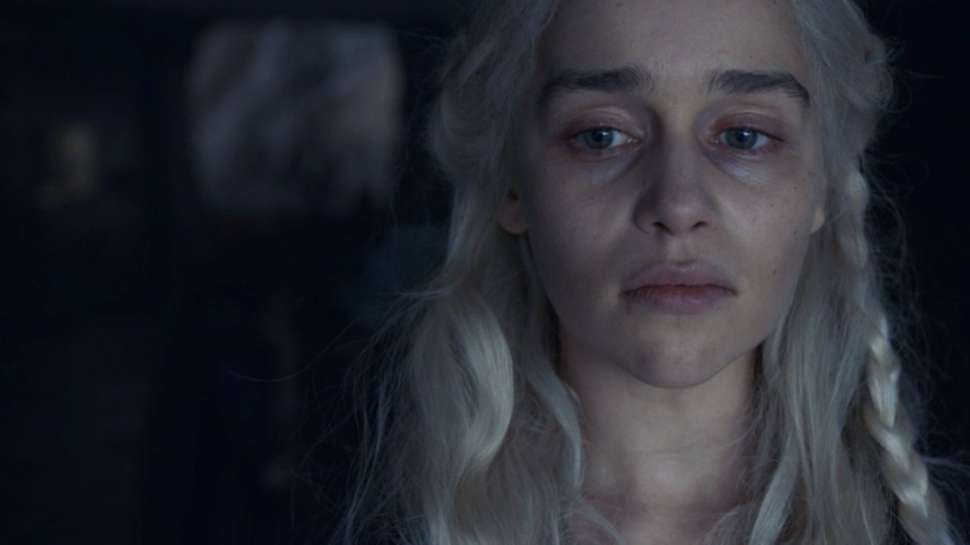 bluth said:
should have voted for loras giving renly a gobby as my #1 instead of wasting it on MHYSA just like u lot probably did ya sleazy bunch of poofs

Make sure you guys watch the thread (button below thread title up top) so you get notifications for when there are posts in the thread! never miss an update ladies

bluth said:
thanks for hosting allstar u’r doing amazing sweetie but now i have nothing left to lose

We need to make

Penk said:
We need to make 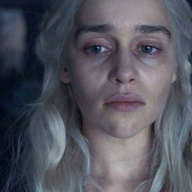 I said a REACTION smiley, you’re the one who needs to pay attention! :offtopic:

were there any moments nominated for best AND worst?

big in the game said:
@Allstar

were there any moments nominated for best AND worst?